The news story that motivated this blog entry reports that a scientific study found an undeniable link between heart health and Erectile Dysfunction. Even if men only had a little problem with Erectile Dysfunction, it still had an impact on many different heart problems.

Because this scientific study found that the heart, which is located in the chest, 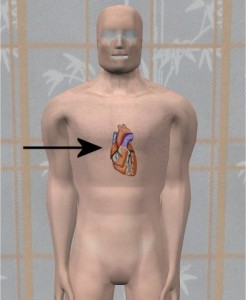 can be affected by events taking place at the penis, which is located at the groin,

The original news story is reprinted next.

Erectile dysfunction (ED) may not be men’s favorite subject, but a new study shows why it’s one health concern that probably shouldn’t be swept under the, er, rug. Earlier evidence has shown ED to be linked to heart problems, which is a logical connection, since the heart and penis alike rely on a healthy blood flow. If one area’s supply is faulty, it makes sense that the other’s might be, too. But what’s new about the current study is that it teases out the relative risk levels for men experiencing mild, moderate, or severe ED. The study finds that even mild ED can increase one’s risk of a heart problem, and even of death.

And men with ED of any severity – mild, moderate, or severe – also had a greater risk of dying from any cause, whether they’d had heart trouble in the past or not.

Interestingly, men with even mild ED had a greater risk of certain kinds of heart problems, and of early death, than men without. Taken together, these results all suggest that there’s a consistent link between ED and heart disease, even when all other variables (smoking, weight, physical activity, alcohol consumption, and the like) are held constant.

“These results tell us that every man who is suffering from any degree of erectile dysfunction should be seeking medical assistance as early as possible and also insisting on a heart health check by their GP at the same time,” said Rob Grenfell, the Cardiovascular Health Director of Australia’s Heart Foundation. Rather than simply treating the ED with one of the popular ED meds, looking deeper into what else might be going on to underlie it is probably a very good idea.

There’s no evidence that ED would cause heart problems or vice versa – just that the two variables are connected, likely due to problems in the vasculature that are linked to both (like atherosclerosis and endothelial dysfunction). But ED might be an important “biomarker” for heart disease, and the experts say that men should treat it as an indicator that it’s time to see a doctor, especially since so many cases of early heart disease are undiagnosed.

“This is the ‘canary in the trousers’ for men across the country,” Grenfell told Australia’s ABC. “[I]f you have erection issues, it’s a warning that you may also have issues with your heart. I urge any man suffering an erection difficulty to see their doctor to request a heart health check to measure their likelihood for having a heart attack in the next five years.