According to Happeh Theory, the human body is really a big penis. There are a couple of ways to explain why. One is that the penis is like a fish, and according to Darwin’s Theory Of  Evolution, human beings evolved from fishes. So it would be logical that a human body still retained at it’s core somewhere, the elements of the fish that it evolved from.

The second way to explain why the human body is really a big penis is one of function. A penis functionally is a pump. It pumps urine and semen from inside of the body to the outside of the body. The reason a human body is like a big penis is because constant pumping action is what keeps a human body alive. Blood and other fluids along with forces within the body need to be pumped here and there for the body to function properly. Since the body already has a penis as a blueprint for a working pump, it seems logical the body would use that same pump design where ever else pumping was needed, and since the entire human body is a pump, the entire human body needed to be a penis shape.

Many people if asked to find the penis shape on the body of the man, would choose his torso to be the equivalent of the shaft of a penis,

and his head to be the equivalent of a penis head. 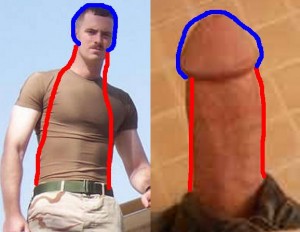 That is a valid observation. The torso with the head on top does indeed form a penis shape, and there is pumping action of the torso up into the head by that penis shape.

Try looking at the comparison picture again for a different penis shape.

Did you find another one? What if the comparison picture is changed slightly as done next?

Did you find it this time? There is a very clear penis shape on the man’s chest. His abdominal muscles are the shaft of the penis,

and his pectoral muscles are the head of the penis.

The reason that particular penis shape corroborates the claim that the human body is constructed from penis shapes because a penis shape is a pump, is that the penis shape on the man’s chest is right on top of his lungs.

And everyone knows the lungs are pumps that pump air in and out of the body to keep the body alive.