For the purposes of this discussion, the head in the following picture will be treated as a properly aligned and shaped human head.

Angled Dome Shrinkage is so named because the head looks as if a dome was placed over it and everything under the dome was reduced by some amount.  The dome can cut across a small, medium or extremely large part of the head.

The angle of the base of the dome shape can be anything from 1 degree to about 75 degrees.

The reason why the visible head change known as “Gumby Head” and Angled Dome Shrinkage are strongly linked is obvious when pictures of the two conditions are compared.

Gumby Head IS Angled Dome Shrinkge. The two terms could be used interchangeable.

The conditions known as “Big Eye” and “Egyptian Eye” affect the eye that is within the area of the Angled Dome.

Skull Distortion is strongly linked to Angled Dome Shrinkage because the skull is within the area of the Angled Dome.

Angled Dome Shrinkage will also affect the hairline that is within the area of the Angled Dome.

All of the face that lies within the boundary of the circle will be affected by Circle Shrinkage. This picture highlights the part of the example face within the Circular Shrinkage Area.

Here is an image of an actual case of Circle Shrinkage.

This picture has the area of Circle Shrinkage superimposed on it.

The human body has what is commonly called an “energy body” associated with it. That energy body can be treated as an exact duplicate of the physical body.

“Energy Head Distortion” is similar to “Circle Distortion in that it is the area where the head of the energy body is superimposed over the physical head that experiences changes,

like it is the area of the head where the circle is superimposed on the head in Circle Distortion that experiences changes.

Here is a gallery of Energy Head Distortion examples.

And here are the same images with a duplicate of the physical head placed approximately where the head of the energy body is currently located.

One Half Face Shrinkage

“One Half Face Shrinkage” is the name given to the collection of changes that occur relatively evenly to one entire half of the face.

“Inner Eye Focused Shrinkage” is the name given to a collection of changes that affect one half of the head and whose focus is on the inner part of the eye.

and all of the changes will give the definite impression that they are all focused on the inner eye.

Even though both conditions affect most of one half of the head like One Half Face Shrinkage does, the obvious focusing of that shrinkage on the inner eye in “Inner Eye Focused Shrinkage” justifies creating a category for just those types of face changes.

“Lower Quarter Face Shrinkage” is the name given to a collection of head changes that look as if they were created by shrinking the lower quarter of one side of the face.

Here is an actual example of “Lower Quarter Face Shrinkage”.

The area of “Lower Quarter Face Shrinkage” is outlined in this picture.

And then a comparison picture to help see the changes to the face as well as the changes that occur in the body in a a case of “Lower Quarter Face Shrinkage”.

The example man has Lower Quarter Face Shrinkage on the right side of his face in the highlighted area of the following image.

The weakening of the right side of the face means it is not strong enough to prevent the head from tilting down to the left.

The bodily weakening associated with this case of Right Side Lower Quarter Face Shrinkage gives the right side of the body the tendency to rotates forwards.

He has simultaneously lifted up his shirt with his right hand when he rotated the right side of his body forwards.

Lifting up his shirt exposes an arch shaped area of the right side of his body.

If that arch shape is extended upwards, the top of the arch falls on the part of the right side of the face that was previously said to have Lower Quarter Face Shrinkage.

Here is a seated example of Lower Quarter Face Shrinkage. 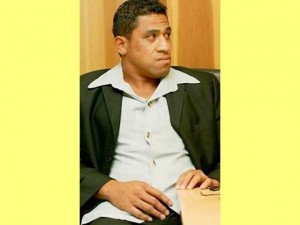 A separate category for “Lower Quarter Face Shrinkage” is being used in this discussion because of the overwhelming number of examples where the shrinkage to the lower quarter part of the face is so severe that the shrinkage of the rest of the face is usually overlooked during an initial glance. )

“Post Shrinkage” is the tentative name given to a collection of head changes that look as if they are the result of a post shaped area of the neck and head being shrunken.

The human body behaves as if there is a pyramid inside of it. That pyramid should be centered on the body.

“Pyramid Distortion” is the name given to a particular look of the head that is the result of the pyramid moving away from it’s proper position centered on the body.

“Upper Angled Wedge Shrinkage” is the name given to a collection of changes that appear in a wedge shaped area on the upper part of the head.

The changes give the impression that they are moving towards the back of the head as if something back there was pulling on them.

This gallery contains images of hairlines whose natural shapes have been distorted.

This section contains posts about hairlines that have been distorted in a way that can be explained by Happeh Theory.

This section is devoted to posts about faces with one half shrunken whose existence supports the claims of Happeh Theory.

This gallery contains examples of faces in which one half is smaller than the other half.

This section is devoted to posts about a bodily change known as “Cyclopean Eye” in Happeh Theory nomenclature.

This post contains a gallery of pictures of a condition known as “Cyclopean Eye” in Happeh Theory nomenclature. “Cyclopean Eye” is so named because the face of the individual gives the impression they only have one eye.

This section contains posts devoted to skulls with distorted shapes whose existence supports the claims of Happeh Theory.