(1) – By  shrinking and tightening the organic tissue of the eye and the immediately surrounding area of the head, which prevents the full range of movement of the eyes so they can cover the full FOV they were designed to cover.

(2) – By shrinking and tightening the organic tissue of the head, neck, and body, which interferes with their ability to assist the eyes in focusing on an object of interest.

(4) – By shrinking and tightening the organic tissues of the eyes and the immediately surrounding area of the head, which reduces the FOV of the eyes by reducing the aperture or the opening thruogh which the eyes receive light.

(1) – The tightening of the organic tissue surrounding the eye prevents the eye from traveling through it’s full range of movement which means it cannot cover the full FOV it was designed to cover.

The next picture shows an overhead view of an eyeball with a pupil on it. The two red bars in the picture represent the boundaries of the FOV of this normal healthy eye.

The healthy eye surrounded by the properly functioning organic tissue of the head can turn to the left and look down the left FOV boundary, 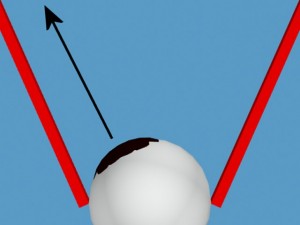 or it can turn to the right and look down along the right FOV boundary.

A reduced FOV is demonstrated in the next picture.

The right boundary marker has been rotated so it points straight forward. The FOV is now smaller because the distance between the two FOV boundary markers is closer together.

The next picture shows the left FOV boundary marker rotated so it points straight ahead.

The next picture compares the normal FOV to the reduced FOV to viscerally demonstrate how much of the FOV of the eye has been lost in each example.

(2) – the tightening of the organic tissue around the eyes can forcibly change the orientation or focal point of the eyes.

The eyes of a human being are designed to point in a certain direction under normal circumstances. The next picture shows the eye with the FOV boundary lines and an object that is directly in front of the eye.

This picture represents a normal eye that is oriented in the way it was designed to be. The eye is pointing straight at the object in front of it. 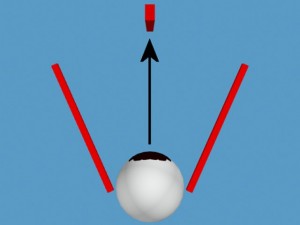 or any other imaginable direction. 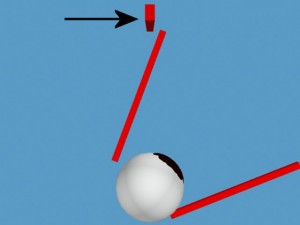 It makes no difference at all that the eye is functioning 100% and can see every detail put in front of it. If a human being focuses their head on an object to look at it and one eye is pointing sideways so it does not see the object, that eye may as well be blind.

(3) – The tightening and shrinkage of the eyes and surrounding organic tissue of the head causes blindness by reducing the aperture, or the size of the opening of the eye. 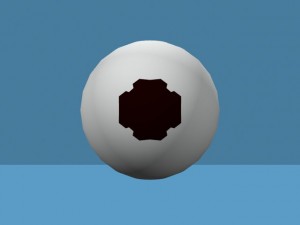